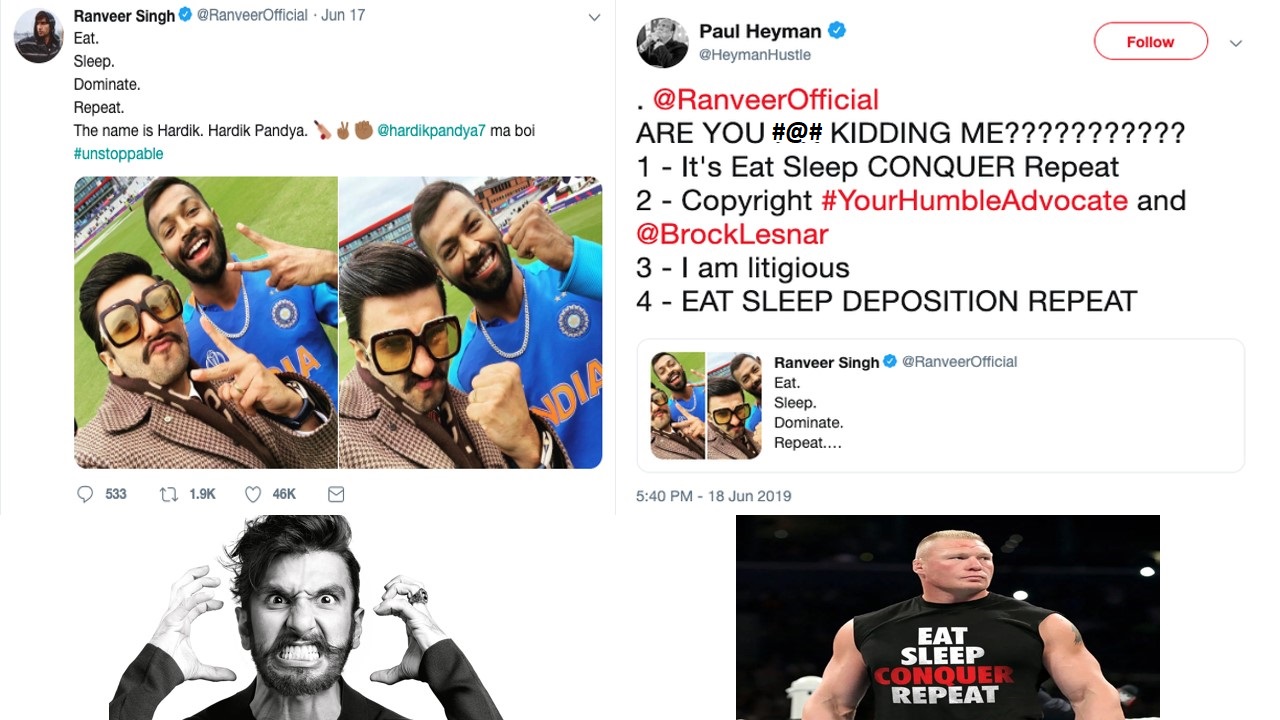 [This post has been authored by Anubhav Das, a student at NUALS, Kochi.]

The finals of the Cricket World Cup 2019 gave the world a final to remember through a match which had unexpected twists and turns until the last ball. While controversy arose due to the super over and the way the winner was chosen, this world cup season also saw an intellectual property issue when Bollywood actor Ranveer Singh used the catchphrase “eat, sleep, dominate, repeat”, on Twitter in order to congratulate Indian cricketer Hardik Pandya after India won against Pakistan in Manchester on June 16, 2019. The catchphrase “eat, sleep, dominate, repeat” used by Ranveer Singh is actually a spin-off of the catchphrase “eat, sleep, conquer, repeat” which is often used by WWE Superstar Brock Lesnar. The tweet by Ranveer Singh caught the eye of Paul Heyman (Brock Lesnar’s advocate) and he took to Twitter to send across a notice to Ranveer Singh for stealing Brock Lesnar’s popular war cry. He threatened the Bollywood star with copyright litigation for using the catchphrase without any authorization. Although no litigation was subsequently initiated, it certainly brings us to the question, if copyright law can protect a catchphrase? If not, then can catchphrases be protected at all under intellectual property law?

The concept of copyright exists in order to grant protection to the creator of original content.[1] However, there is a conceptual difference in the way copyright is perceived and implemented across the world.[2] In India, the Copyright Act, 1957 gives protection to the creator of original content. This protection grants the creator a right to stop his work from being used without his authorization. Section 13 of the Copyright Act, 1957 deals with works that can be copyrighted, wherein it states six classes of works which can be given copyright protection. They are original literary works, dramatic works, musical works, artistic works, cinematograph films and sound recording. Relevant to the discussion at hand are the following generally accepted rules on the eligibility of subject matter of copyright protection:

If ideas or common short phrases were to be given monopoly under the copyright laws, it would eventually defeat the purpose of the law – encouraging creativity. Even Circular 33 (works not protected by copyright law) of the US Copyright Office explicitly prohibits granting of protection to catchphrases. The stance is same under UK copyright law. But under EU copyright law, copyright can be granted if the ‘choice, sequence and combination of words’ express the author’s creativity and originality.

However, Brock Lesnar’s catchphrase cannot be granted copyright protection due to its lack of originality[3]. Hence, Paul Heyman’s copyright litigation threat to Ranveer Singh, is not an answer for the protection of Brock Lesnar’s war cry.  So, now arises the question, can catchphrases be protected under any other aspect of intellectual property rights? The answer to this question lies in the trademark laws.

Trademark refers to a mark which helps the manufacturer or owner of certain goods or services to distinguish itself from those of its competitors and may include “shape of goods, packaging and combination of colours”.[4] When catchphrases are used in the form of trademark, such phrases are essential in order to distinguish the products from those of others. Similarly, whenever a celebrity uses a catchphrase, and it becomes popular, the celebrity may derive income out of it by exploiting the phrase commercially (for e.g. in the form of merchandise, t – shirts, cups, clothes, cushions and etc).

Position in the U.S.A.

There are many phrases which have been granted trademark protection under the U.S Trademark Law. The famous Swahili phrase “Hakuna Matata” which was used in the movie ‘The Lion King’ is owned by Walt Disney as a registered trademark and is commercially exploited on merchandise. It is to be noted that such phrase should not be a commonplace term (Cardi B, a famous American rap artist, was denied protection for “Okurrr” as it was a common term). US courts have granted, trademark protection for catchphrases by considering essentially two points –

Brock Lesnar’s catchphrase is not unique as it has already been used widely.[5] Hence, even if an action for infringement is instituted in the US courts, no remedy would be available on the ground that the catchphrase does not involve creativity or distinctiveness. Association with a good or service may be dispensed with in this case, as catchphrases have been registered in the U.S. which concern a person.

Many catchphrases such as “I’m Loving It” for McDonalds, “Just Do It” for Nike etc. have been granted trademark protection in India. Although, the position is not clear regarding, trademark on celebrity catchphrases, but decisions by various High Courts can be used to remove the ambiguity. In Reebok India Company v. Gomzi Active , the Karnataka High Court held that in order to claim a phrase as trademark, the person must establish that his ‘distinctive use’ has developed goodwill and secondary meaning for his product (Para 12 of the Judgement). A similar stance was taken in Raymond Limited v. Radhika Export And Anr, by the Bombay High Court wherein the need for ‘creative use’ and ‘considerable acquired goodwill and market reputation’ to claim trademark protection for catchphrases was stressed upon (Para 11 of the Judgement).

Looking at the ‘wide usage’[6] of Brock Lesnar’s catchphrase, registration would surely be refused under the Indian law. Anyhow, currently, there is no registration of the phrase “eat, sleep, conquer, repeat” in the Indian Trademark Registry and as per Section 27(1) of the Trade Mark Act 1999, infringement litigation cannot lie when the trademark is unregistered. Even if, the catchphrase is granted registration, infringement will only take place when the registered trademark is used in the ‘course of trade’ by another party.[7]  Ranveer Singh merely used it on social media which no way comes under the ambit of the term ‘course of trade’.

Copyright laws are pretty harsh when it comes to the protection of catchphrases. If tomorrow copyright protection is given to such short phrases then, maybe one day will come wherein no phrases would be there to use. On the other hand, trademark protection for catchphrases seems to be valid. A brand needs to distinguish itself from that of the others, and thus catchphrases need protection. The controversy above would have made more sense if the threat was regarding trademark infringement. But anyhow Ranveer Singh’s usage could not amount to infringement whether it is copyright or trademark.

[3] ‘Eat, Sleep, Repeat’ is an album by Copeland and it is also used by many brands in T – shirt designs.